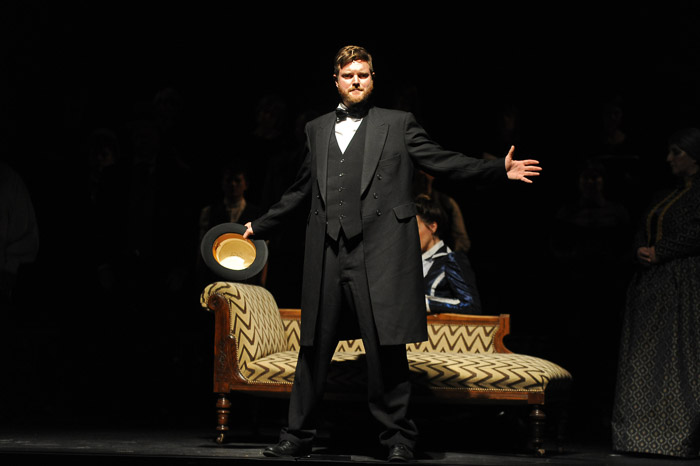 A video of the musical about the life of legendary Fife businessman and philanthropist Andrew Carnegie, starring his great-great-great grandson in the title role, will be available to a global audience for the first time as part of this year’s online Edinburgh Fringe.

The two-hour video of Carnegie – The Star Spangled Scotchman, recorded during its two-night run at Carnegie Hall, Dunfermline, in May 2019 as part of events to mark the centenary of his death, will be available to stream on the Fringe Player from August 6. It will be the first time the show has been seen outside Scotland.

The musical has been developed over the last eight years by Ian Hammond Brown, co-writer of Whisky Galore A Musical, who won a development grant for it from Creative Scotland in 2013. It’s since enjoyed a successful run at the 2016 Fringe as well as the Carnegie 100 performances.

The title role has been played since 2016 by 31-year-old singing teacher Joe Whiteman, who’s descended from Carnegie on his mother’s side. It also features Donna Hazelton, winner of Channel 4 talent search Musicality and West End Star of Chicago and Girls Night Oot!, as icon’s domineering mother, Margaret Carnegie, and Fife actress and singer Kim Shepherd as his wife, Louise.

Carnegie – The Star Spangled Scotchman tells the story of Carnegie’s life from the viewpoint of a steelworker killed in the controversial homestead steel plant dispute of 1892 who has come back from the afterlife to decide on Carnegie’s eternal fate in the last two hours of his life.

Ian Hammond Brown hopes the streaming debut for the show will help gain interest in a full production from producers. He’ll soon be speaking to an American producer about taking the show to the States. Ian also hopes the musical will raise awareness of the Carnegie story and Dunfermline.

Speaking about the online debut of the show, Ian Hammond Brown said: “I’m delighted we’ve been able to include Carnegie – The Star Spangled Scotchman in the Fringe for a second time using the recording of the Carnegie Hall show. It’s very exciting to think the show will be broadcast to a worldwide audience.

“There’s nothing like live theatre, but at least this way we can capture some of the excitement of a live production, keep supporting the arts and hopefully entertain people or perhaps spark a young person’s interest enough to go and find out more or get involved in theatre after what has been a very difficult year-and-a-half for everyone.

“The musical has been developed and refined since the 2016 Fringe production – with the addition of the song Mothers And Sons, which was added for Mrs Carnegie to sing in the 2019 performances, further developing her character.”

The musical has also been published by Stagescripts and is available for schools and theatre groups to perform.

The show can be viewed on the Fringe Player from August 6 to 30 at http://www.bit.ly/CarnegieMusicalFringe2021

This site uses Akismet to reduce spam. Learn how your comment data is processed.